The right temperature for shorts varies throughout the world. This article lets you know when you can expect to see others wearing shorts. 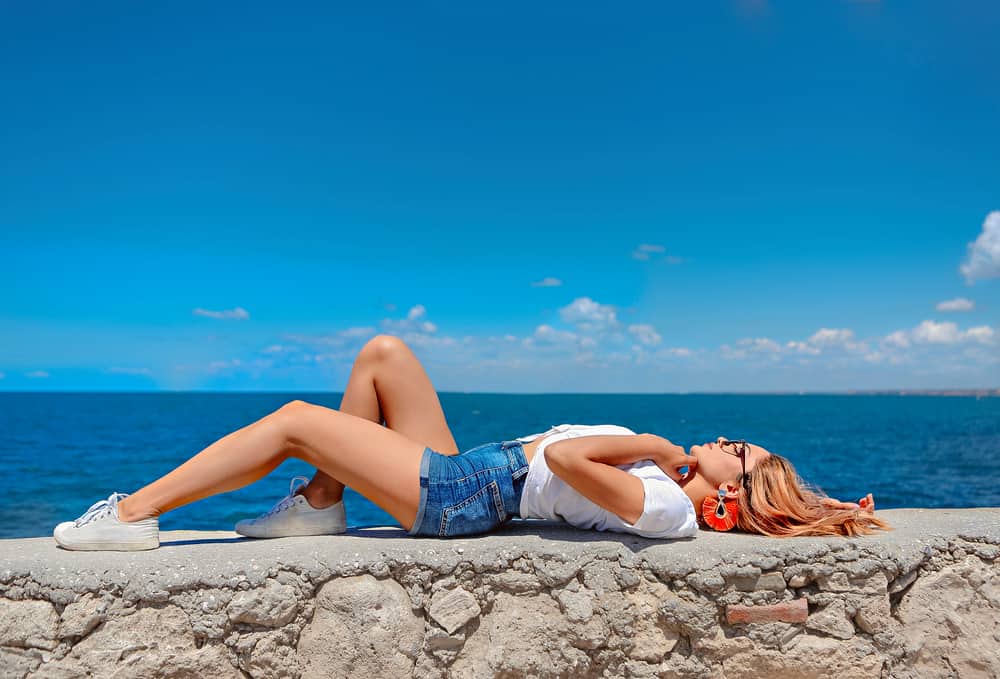 Sometimes you want to ditch the winter wear and enjoy the summer sun. The first rise in temperature might tempt you to throw on your shorts and bask in the sun. What temperature provides the actual perfect weather to ditch the long sleeve shirt, winter jacket, lightweight jacket, gloves, and other winter clothing?

The answer to this varies from place to place. Everyone thinks differently and essentially, it depends on the area’s climate.

The UK thinks differently than the UAE where you would rarely see a pair of shorts. India and the Arctic Circle will just never be on the same page.

You get a different answer in Minnesota and Michigan than in South Carolina or Florida. Colorado thinks differently than southern California. So, how do you come up with a definitive answer?

Instead, let’s look at how different locations determine the answer to “What temperature is shorts weather?”

The United States of America

The US provides a diversity of weather, so let’s start there. Its regions vary from permanently frozen Alaska to rainy Washington and Oregon to sunny Nevada to windy Illinois to drought-stricken Texas to always sunny Florida to chilly northeast Maine. This also leads to differences in fashion, since the north favors sweaters with shorts, while the south wears polos or t-shirts with shorts.

Northeast: In the northeast states such as New York, Maine, New Hampshire, Connecticut, and the Virginias, the latter of whom argue themselves southerners, people begin wearing shorts in the 50s and 60s Fahrenheit. It snows regularly in these states, and they’re accustomed to below zero temperatures, so hitting 50F seems toasty to them.

Deep South: Residents of the Deep South states such as South and North Carolina, Georgia, Alabama, Tennessee, Kentucky, both of which argue themselves part of the mid-south states, shake their heads at this behavior.

Although those who live in this region say Florida is not a Deep South state, it geographically belongs. In the Deep South, shorts weather tacitly begins at 70 F, but temps must rise to 80 F before you will see large numbers of people wearing shorts. In Florida, it never gets too cold to not wear shorts, so you can visit it in December and find people in jams or Bermuda shorts.

Mid-south: In the mid-south states of Texas, Oklahoma, Arkansas, Kansas, and the Dakotas – North and South, you still get variance. The Dakotas and parts of Kansas get cold weather with lots of snow. Their heartier populace wears shorts on the same temperature scale as the northeast.

In Arkansas, Oklahoma, and Texas though, snow only happens once per year typically. Winters remain in the 30s or 40s F. This means people consider that cold. Conversely, summers in these states often top the 100F temperature mark, so people want warmth before they throw on their shorts. 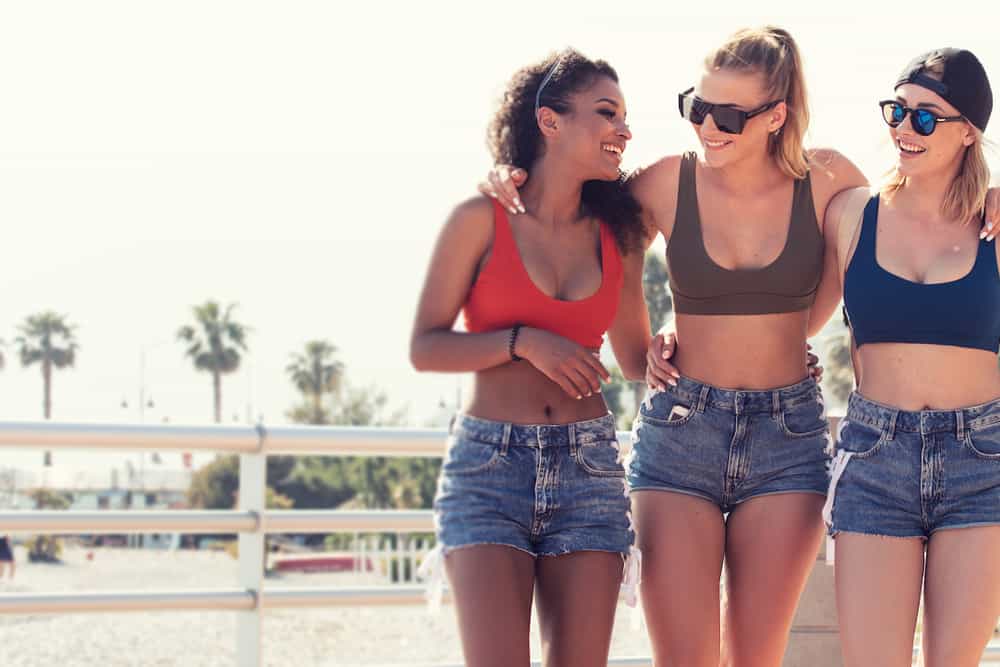 Midwest: These north-central states include Wisconsin, Illinois, Ohio, Montana, etc. It snows and the temperatures drop to below zero during winter. When it finally reaches the double digits again, many people celebrate by wearing shorts. You might laugh if you see a person wearing shorts in 20 or 30 F weather, but when a person becomes accustomed to -10 or -20 F, 30 F feels rather balmy.

Northwest: In the northwest states of Oregon and Washington, you find a middle ground. You will spot people wearing shorts when the weather hits the 50s F, but en masse when it reaches the 60s. These states do get snow, but they’re better known for their rainy season.

Northeast: In Maine, New York, New Hampshire, Connecticut, Massachusetts, and other states in the region, you will spot a few residents wearing shorts in the 50s and 60s F, but the 70s really bring out the shorts. The residents of these states live through a few snowfalls each winter and survive temps that fall well below zero. As soon as early spring-like weather hits, they’re ready to trade winter coats for Bermuda shorts.

Alaska: Only small portions of Alaska thaw each year. At its warmest, temps get to the 50s and 60s F. Climate change has wrought a few changes there and in recent years experienced up to six degrees warmer temps. You should not expect either of its extremes though. 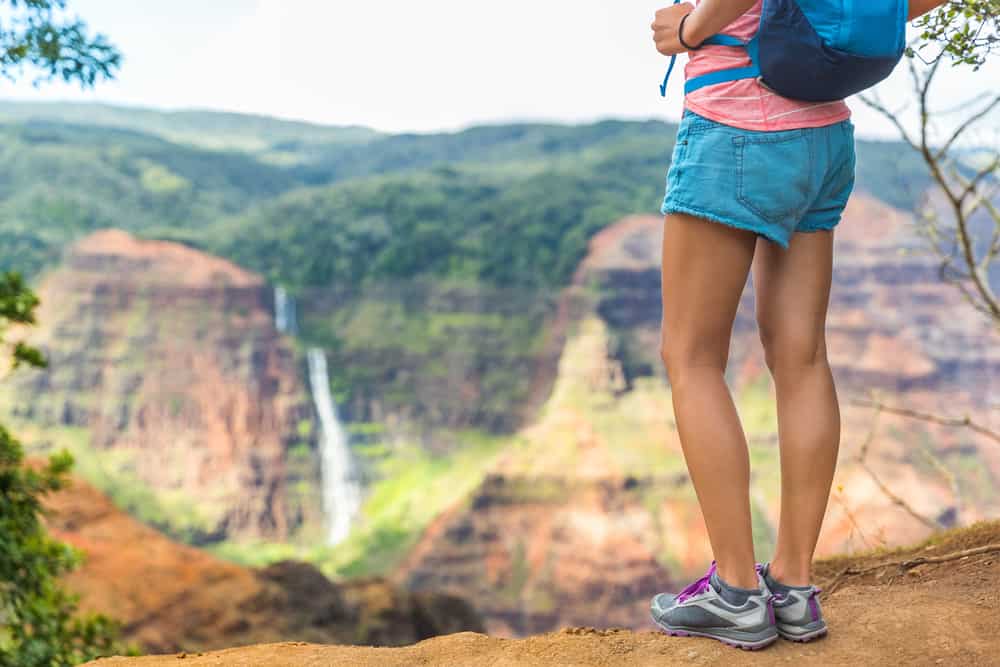 The coldest day the state ever experienced was a frigid -80 F. It once reached 100 F in Alaska, too. You can expect to see people who live here to wear shorts on the same temperature scale as those in the Northeast.

Hawaii: Much like Florida, Hawaii only has shorts weather. There’s no real winter in this US state. This tropical state experiences lows in the 60s F and typical highs in the 80s F. Occasionally, the temps reach the 90s F. It only has two seasons – summer and winter but defines them differently than the rest of the country.

The United Kingdom and Northern Ireland 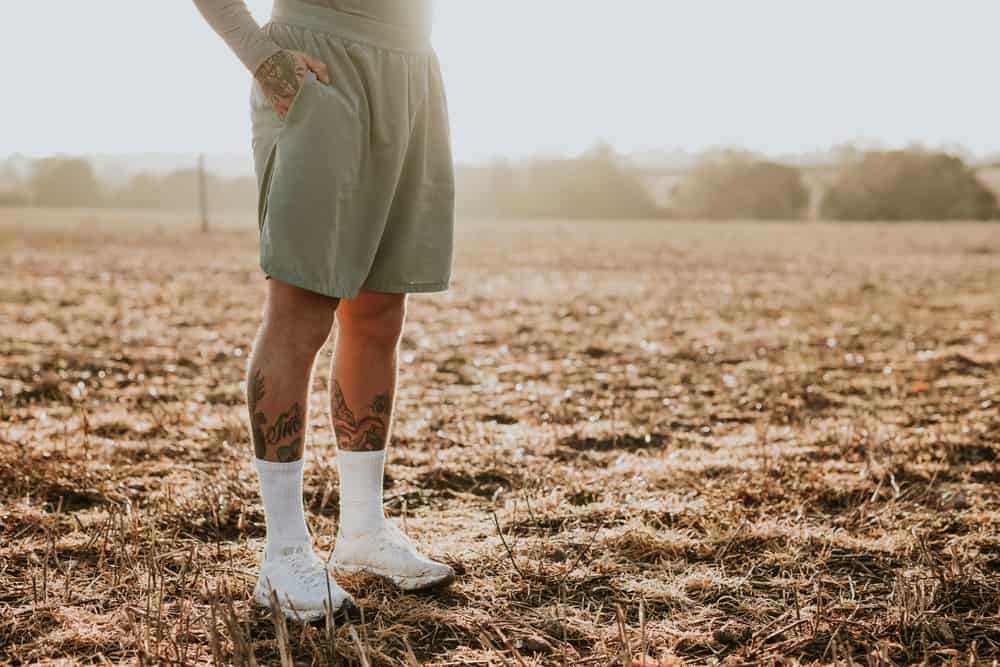 Across The Pond, also known as the Atlantic Ocean, in the UK, the compactness of the island countries makes the climate more uniform. People begin wearing shorts when the temperatures reach 50F but do so en masse once they reach 60F. With four formal seasons, including snows in winter, the climate lends itself to a little of everything.

Crossing the English Channel to mainland Europe provides a bit more diversity in when to wear shorts, but in countries that deem them acceptable attire, you can typically count on seeing the residents wear them starting at about 50 F. 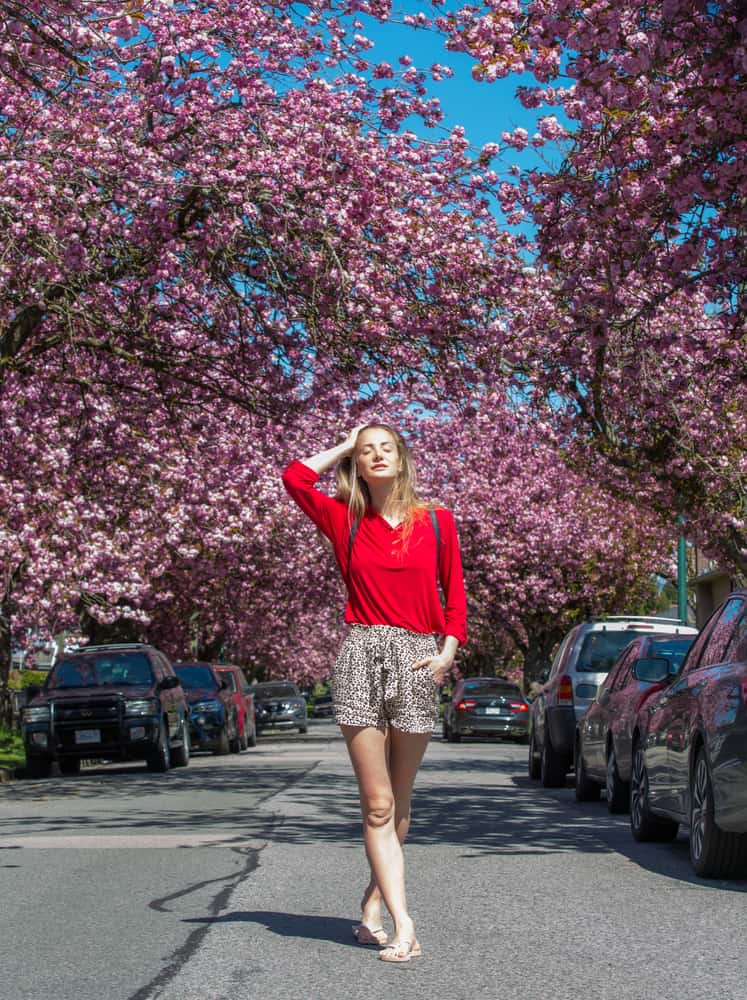 Canada provides a similar complexity in shorts weather as the US does. These two massive countries have such a landmass, spread throughout such varying climatic regions that no one answer exists. The beachy Vancouver varies rather vastly from Yellowknife. In the latter, you would never really wear shorts. Frostbite is just that icky. 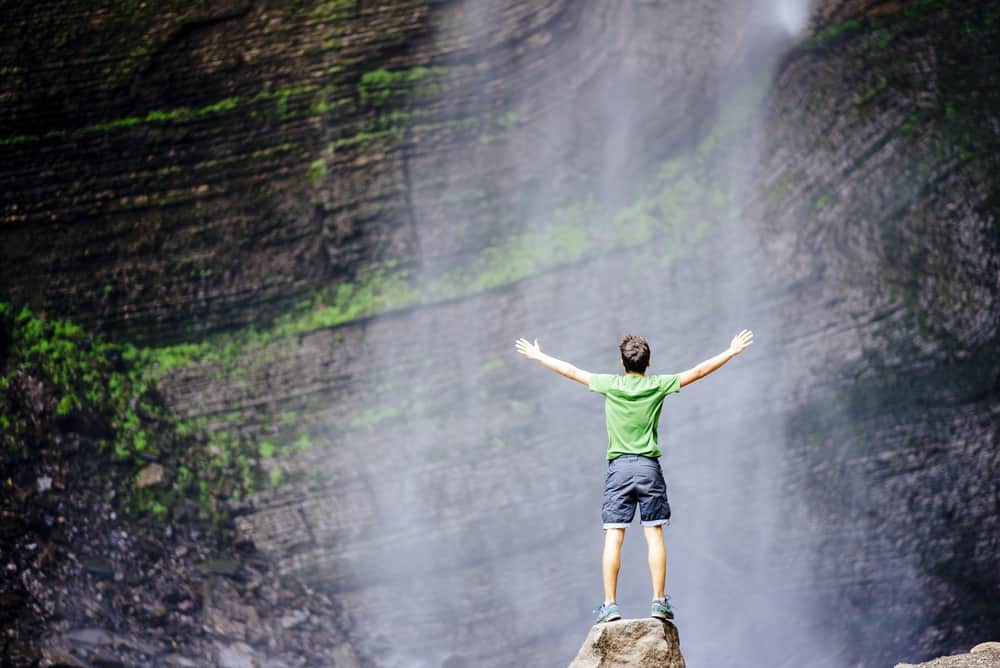 The Falkland Islands rest in the continent’s subpolar region. Shorts weather there resembles what you would consider Wisconsin shorts weather. In northern Chile, however, think along the lines of Texas. Most of Mexico, especially its coasts, dress in terms of Florida or southern California.

Where You Won’t See Shorts 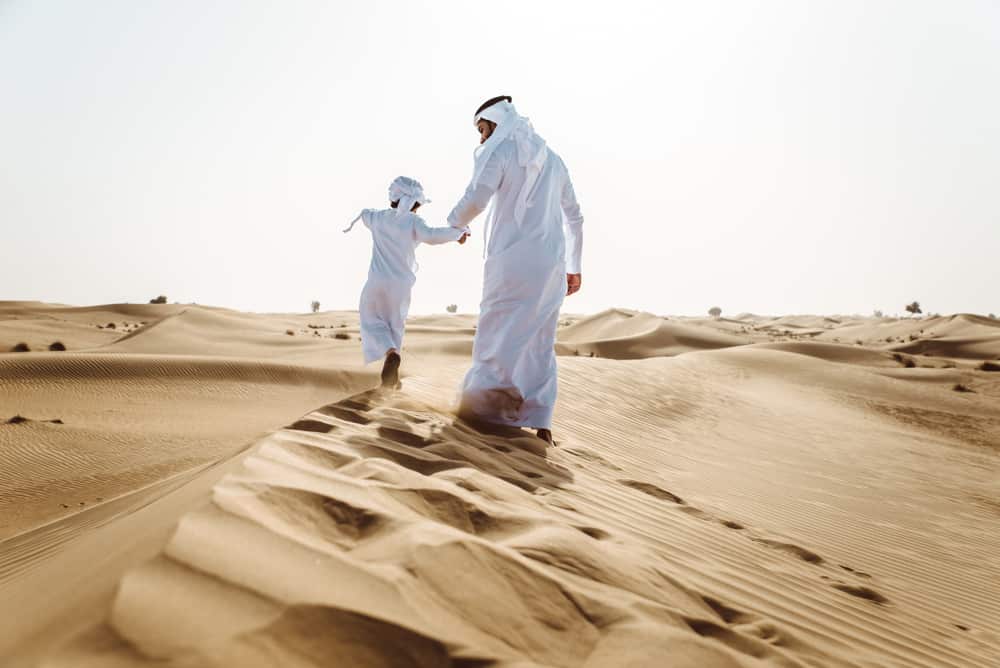 Before you travel, check a country’s religious climate. Outside of the US and Canada, many locations consider shorts inappropriate. Most Middle Eastern countries would not only frown on shorts, but you would also probably get jailed, especially if you’re female.

Where propriety is everything, the locals expect that even guests will wear local garb. You should always check local religious law and local customs before you travel. Showing respect goes a long way toward acceptance, and it can make your business trip or vacation much more enjoyable.

Only four percent of the population will willingly wear a pair of shorts when the temperature drops below 20F. Amusingly, precisely 60-degree weather misses the mark entirely. It has to inch up one more degree before people want shorts over long pants.

The XRock Ford: What Temperature is Shorts Weather for You?

MSN: What Temperature is Shorts Weather?