Linen is one of the best fabric choices when temperatures start getting warmer. When summer rolls around, linen shirts, dresses, and pants become more popular due to being breathable and breezy. Unfortunately, linen is also notorious for wrinkling easily. So can you iron linen?

You can iron linen, but removing wrinkles is hard unless the fabric is damp. Since linen can also shrink easily, you’ll want to make sure to place an ironing cloth between the iron and the fabric. Then, you can iron using high heat or the linen setting on your iron.

When ironing linen, you just want to ensure that you do so carefully to avoid damage. In this article, I’ll explain how to iron linen, including a step-by-step guide. I’ll also explain whether you can steam linen and how to do so carefully. 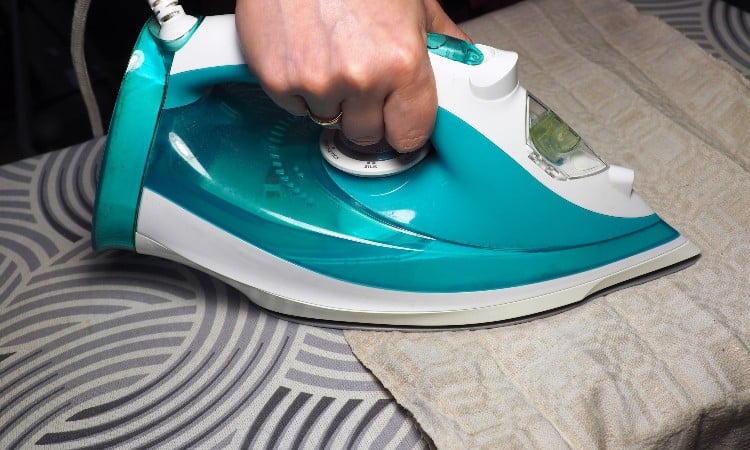 Does Linen Wrinkle Easily?Can You Iron Linen?Best Iron Setting for LinenWhat Temperature Do You Iron Linen?How to Iron Linen: Step by StepCan You Steam Linen Clothes?Conclusion

Despite being light and breezy fabric, it can wrinkle and crease very easily. Even if your linen clothing is wrinkle-free when you wear it, it can get wrinkles just from you sitting down for a few minutes. Many people have accepted that linen wrinkles and will still wear it even if it is wrinkled.

Because of this, linen is sometimes even designed in a way to be worn without ironing and still look good. However, some people don’t like to wear wrinkled clothing, so they want to iron it. In that case, it’s important to know whether or not you can iron linen and how to do it correctly so that you can remove wrinkles effectively without damaging the fabric.

Can You Iron Linen?

Linen can be ironed. However, if you’re familiar with linen, then you know that it is prone to shrinking. Linen shouldn’t be put in the dryer due to shrinking, and pre-shrunk linen can still shrink some. But that also means that linen often doesn’t wrinkle just as a result of being left in the dryer.

If you wash and dry linen immediately before wearing it, then it reduces the chances that it will be wrinkled. However, if it has been folded up for a while, it can wrinkle in the places where it was folded. If you want to iron it, you can, but you will want to be very careful since the heat from the iron can cause some shrinking.

It’s very important that you use the proper iron settings and follow the right steps when ironing linen. Linen can be hard to remove the wrinkles from, so following the right steps will give you the most success. But be aware that even if you remove the wrinkles from your linen clothing, it will likely get wrinkled again if you sit down for a while.

Since linen can be hard to remove wrinkles from, it’s best if you use high heat to remove them most effectively. However, when using high heat, you want to protect the fabric from burning and shrinking. The best way to do that is to first dampen the fabric. But, heat can still damage the fabric, so you’ll want to place a pressing cloth between the fabric and the iron.

Some irons have a specific setting just for linen. If your iron has a linen setting, it is safe to use it for your linen fabrics. However, you’ll still want to dampen the fabric before ironing it and place a pressing cloth over it.

What Temperature Do You Iron Linen?

Linen can be ironed using high heat, or you can use the linen setting if your iron has one. But if your iron has specific temperatures instead of settings for different fabrics, then it may be helpful to know what setting to iron it on.

Using high heat is the most effective way to iron linen. The best temperature to use for ironing linen is 445 degrees Fahrenheit. But remember that even with ironing linen at this temperature, you’ll still want to dampen it first.

How to Iron Linen: Step by Step 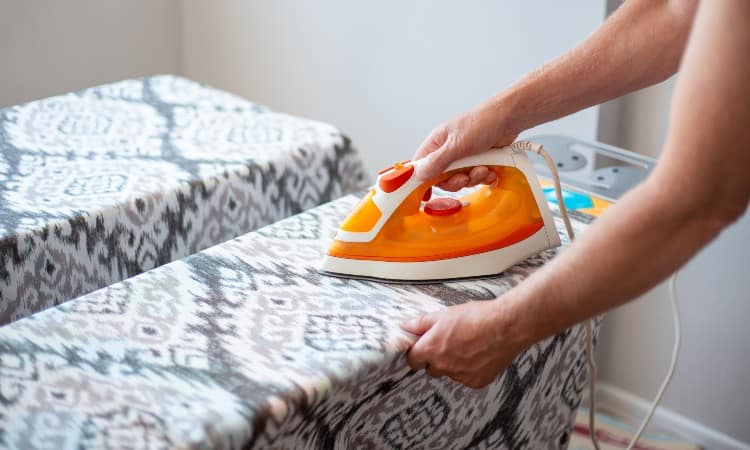 Linen is hard to iron when it is dry. You won’t be able to get the wrinkles out completely, especially if they are deep creases. So the first thing you’ll need to do is fill a spray bottle with water and use it to dampen the linen clothing. This will not help the wrinkles release more easily, but it will also help lower the risk of damage due to the heat from the iron.

Next, plug in the iron and turn it to either high heat or the linen setting. It’s best if your iron has a steam function. Set up your ironing board and place the clothing on top of it. Make sure the ironing board is sturdy enough so that it doesn’t wobble. Let the iron heat up. Then, place a pressing cloth on top of the clothes.

When ironing linen, start with any heavier or thicker areas of the clothing first. For example, start by pressing the collar if a shirt has one, or iron the waistband first on a pair of linen pants. You may also need to dampen these areas more to keep them crease-free.

When ironing linen, use steady strokes and don’t stay in one place for too long. You don’t want to cause scorching marks on the fabric by staying in one area for a long time. Try to keep the strokes of the iron as even as possible. Use steam, if necessary, on wrinkles and creases that are particularly stubborn.

Can You Steam Linen Clothes? 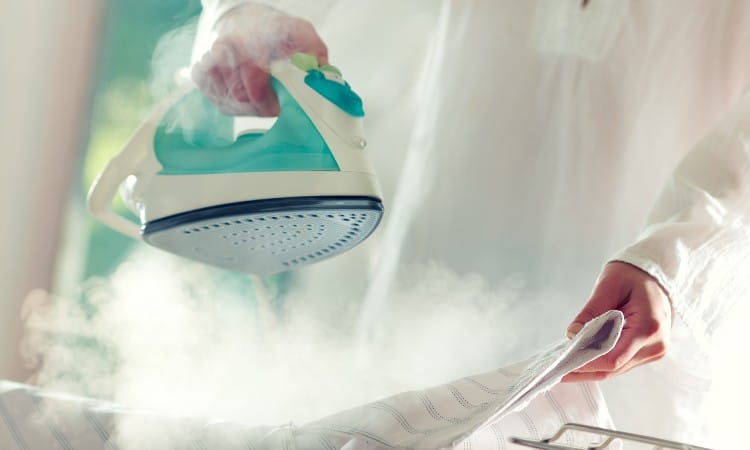 If you don’t have time to completely iron linen, steaming it is another effective way to remove wrinkles. However, linen may shrink some when steaming if it hasn’t been pre-shrunk since there is more contact with direct heat when steaming. You can steam linen, but you’ll want to do so safely. Also, be aware that steaming linen may not give you a crisp look and may not remove wrinkles as effectively as ironing it.

Another way to remove wrinkles from linen is to use the steam from your shower. This won’t remove all wrinkles, but it can at least reduce their appearance. Hang the linen clothing in the bathroom while you take a shower, or you can also just turn the shower on and close the bathroom door. Let the steam from the shower work on the clothing for about 5 to 10 minutes.

Linen can be hard to remove wrinkles from since it is prone to wrinkling in the first place. You can iron it, but you’ll want to make sure that the clothing is damp first and that you place a pressing cloth on top of the clothing to remove wrinkles while preventing damage. When you wear the clothing again, it’s likely to get wrinkled within a few minutes of wearing it, so in some cases, you may just have to be okay with that. If you found this article helpful, share it with others.